How to start phosphate rock flotation?

There are four types of phosphate deposits in my country, mainly marine sedimentary phosphate rock, metamorphic apatite, magmatic apatite and ouray phosphate. Phosphate rock resources are mainly distributed in Yunnan, Guizhou, Sichuan and Lianghu areas, accounting for 77.99% of the total domestic reserves. Compared with other countries, my country is rich in phosphate resources, and there are about 500 phosphate producing areas in the country. 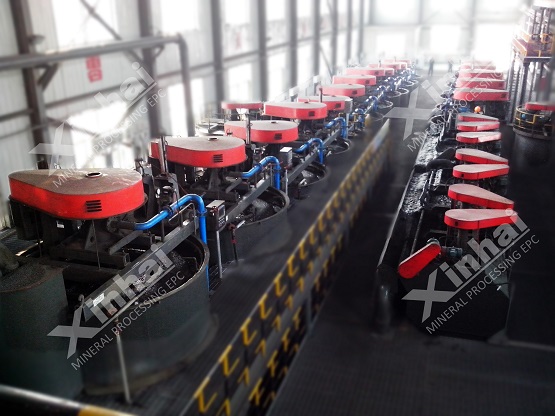 Reverse flotation is to use inhibitors to inhibit phosphorus minerals, use collectors to collect carbonate and other minerals, and use air bubbles to carry them out, so that the target minerals remain at the bottom of the pool, thereby realizing the separation of minerals and phosphorus. Reverse flotation is suitable for calcium phosphate rocks with low content of siliceous minerals and high content of carbonate minerals such as dolomite. Li Guangtao et al. took Yunnan Aluminum as the research object for the flotation experiment of Yunnan phosphate rock. Sulfuric acid and phosphoric acid are used as regulators and inhibitors, yp-01 is used as collector, and pine oil is used as foaming agent. Gangue minerals are removed by reverse flotation. The results showed that the grade of phosphate concentrate was 30.72%, and the recovery rate was 86.02%. The recycling of refractory dolomite is worth utilizing.

Two kinds of reverse flotation are using phosphoric acid or sulfuric acid and its derivatives to inhibit phosphate minerals in acidic media, flotation of gangue minerals with fatty acid collectors, then adjusting the pulp, and then using cationic collectors to float under alkaline conditions. Choose silica.

These two processes utilize the difference in the degree of dissociation between minerals to achieve the separation of useful minerals and gangue minerals. Compared with other minerals, carbonates are low in hardness and brittle. At coarse grinding fineness, carbonate minerals dissociate preferentially. Next, a flotation operation is performed to produce siliceous minerals.